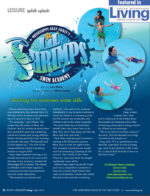 Our Article in South Mississippi Living

In July 2014, Lil Shrimp swim Academy was featured in the South Mississippi Living magazine. Here is the article in its entirety to share with you. 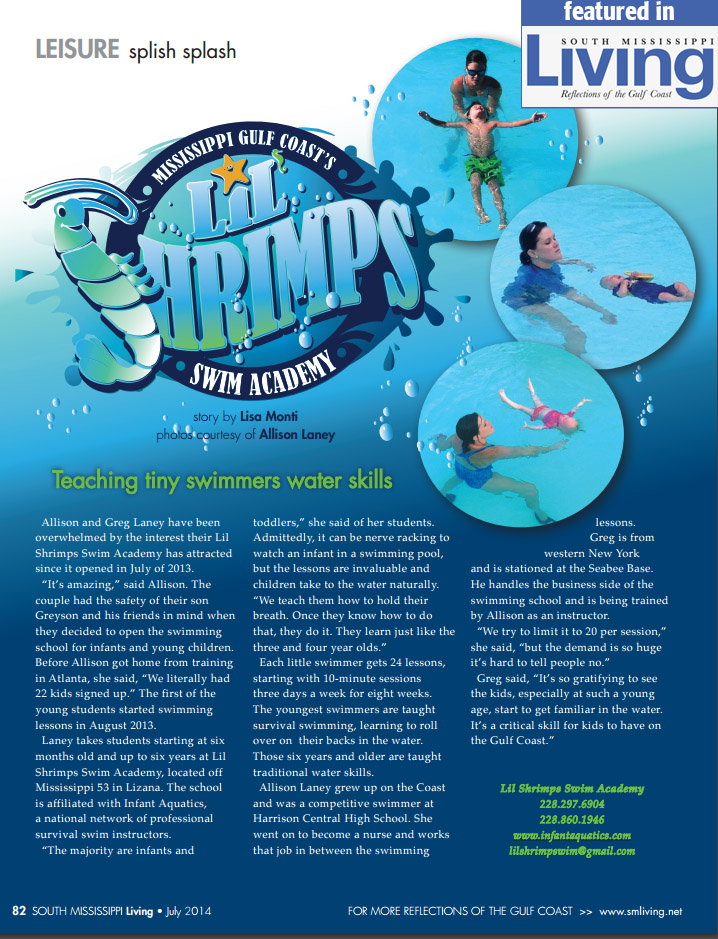 Allison and Greg Laney have been overwhelmed by the interest their Lil Shrimps Swim Academy has attracted since it opened in July of 2013.

“It’s amazing,” said Allison. The couple had the safety of their son Greyson and his friends in mind when they decided to open the swimming school for infants and young children. Before Allison got home from training in Atlanta, she said, “We literally had
22 kids signed up.” The first of the young students started swimming lessons in August 2013.

Laney takes students starting at six months old and up to six years at Lil Shrimps Swim Academy, located off Mississippi 53 in Lizana. The school is affiliated with Infant Aquatics, a national network of professional survival swim instructors.

“The majority are infants and toddlers,” she said of her students. Admittedly, it can be nerve racking to watch an infant in a swimming pool, but the lessons are invaluable and children take to the water naturally.

“We teach them how to hold their breath. Once they know how to do that, they do it. They learn just like the three and four year olds.”

Each little swimmer gets 24 lessons, starting with 10-minute sessions three days a week for eight weeks. The youngest swimmers are taught survival swimming, learning to roll over on their backs in the water.
Those six years and older are taught traditional water skills.

Allison Laney grew up on the Coast and was a competitive swimmer at Harrison Central High School. She
went on to become a nurse and works that job in between the swimming lessons.

Greg is from western New York and is stationed at the Seabee Base. He handles the business side of the swimming school and is being trained by Allison as an instructor.

Greg said, “It’s so gratifying to see the kids, especially at such a young age, start to get familiar in the water. It’s a critical skill for kids to have on the Gulf Coast.”

This site uses Akismet to reduce spam. Learn how your comment data is processed.